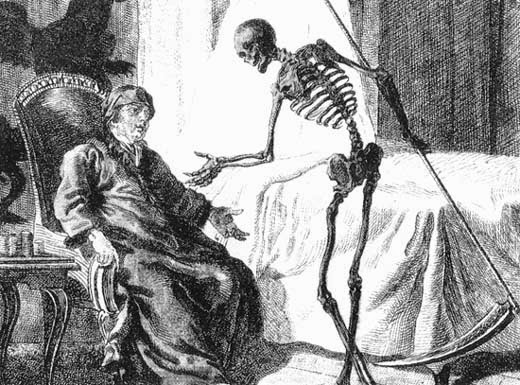 Continuing my journey through D&D's recent clones, looking for good rules that I can grab without needing to run them as a whole, we come to a topic that arises an awful lot in old school gaming: death.

Original D&D had death at 0 HP. Per various reports, one of the distinguishing features between Arneson and Gygax is that the former had no Raise Dead type spells in his campaign, while the latter's players always Raised a fallen comrade. Gygax's AD&D changed the tables where going to 0 (optionally as low as -3) meant you "bleed to death" until -10 HP at the rate of 1 per round. It also introduced my least favorite part of the death and dying rules, "binding wounds" as a form of emergency first aid that suddenly saves characters. It does have the wrinkle that hitting -6 will cause some kind of permanent wound.

Labyrinth Lord and BLUEHOLME kill you dead when you hit 0, no questions asked. Which is fair; it's also what the classic versions of the game they emulate do. OSRIC likewise follows AD&D with the countdown to -10.

Swords & Wizardry does the same, but there's a house rule suggested with negative HP (1 lost per round) up to character level, which doesn't really help low-level characters much but could save a higher-level one who ran into bad luck.

Lamentations of the Flame Princess tinkers with the AD&D system. 0 HP does not cause death, but unconsciousness; -3 is a mortal wound and causes death in 1d10 minutes. Instant death is at -4 hit points. It's not quite clear if there are any bleeding out processes going on; I actually don't think there are, but I'd be willing to be corrected.

Basic Fantasy RPG says that 0 HP is death but presents a couple of optional rules: enabling Raise Dead spells, allowing save vs. Death Ray to survive for 2d10 rounds, or the traditional AD&D "you don't actually die until -10 HP" rule. It offers a variation where the maximum negative HP equals the PC's Constitution score.

Adventurer Conqueror King System has an elaborate "mortal wounds" table that, based on a d20 roll (modified by a variety of factors) and a d6 roll, determines exactly what kind of wound you sustained. This offers a good variety of results that aren't instant death, and gives some potential dismemberment or disfiguration as a result of brushes with death.

While it says it's not a clone (and technically really isn't), Dungeon Crawl Classics does have two mechanics for 0 HP not quite killing a character. One is that on the round a character hits 0 HP or the round after it, the PC can be healed. The other is the "recovering the body" check where it turns out via a Luck roll that the PC isn't quite dead. So that's two last chances. (As long as you're not a 0 level schmuck in a funnel. In that case, you're just dead.)

None of these match what I currently do: I roll 1d6, subtract any negative hit points the character takes, and the result is the number of rounds it takes for the character to bleed out. If this total is 0 or less, it means that instant death has occurred. Magical healing is possible during this window.

The option that is most tempting to me is the ACKS table. It's certainly the most inventive of the lot, and offers a lot of great gory possibilities. The problem is that the rules for how it applies are a bit complicated; I'd be tempted just to roll on it with 1d20 + Con bonus - negative HP. The ACKS way of figuring exactly what percentage of HP you are below 0 is just too fiddly for me. My own house rule is not far from either LotFP or DCC, and I like elements of both. It really requires some more thought as to which is most stealable.
Posted by Wayne R. at 10:40 AM